Application of Nanotechnology in Building Materials 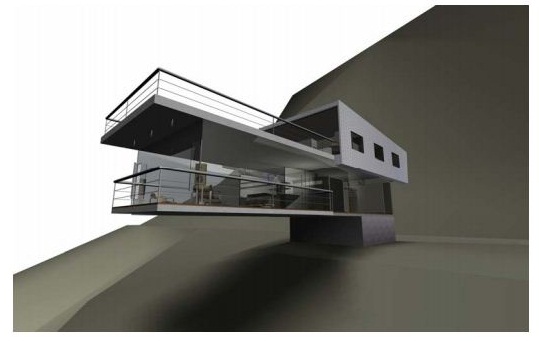 resistance to gravity, wind, earthquake and other loads that act to tear it down. Strength is equally important in non-structural components like windows and doors for security and durability. A load-bearing structural material’s strength/weight ratio is particularly important because stronger, lighter materials  can carry greater loads per unit of material. A higher strength/weight ratio means fewer materials, which in turn means fewer resources and energy consumed in production. Nanotechnology promises significant improvements in structural materials in two ways. First, nano-reinforcement of existing materials like concrete and steel will lead to nanocomposites, materials produced by adding nanoparticles to a bulk material in order to improve the bulk material’s properties. Eventually,when cost and technical know-how permit, we will see structures made from altogether new materials like carbon nanotubes.

Concrete is the world’s most widely used manufactured material; about one ton of concrete is produced each year for every human being in the world (some 6 billion tons per year.) Global annual trade in concrete is estimated at $13-14 trillion. Energy consumption, carbon emissions and waste are all major environmental concerns connected with concrete production and use. Portland cement, the dry powder “glue” that holds aggregate, water and lime together to make concrete, accounts for about 12 percent of its volume, but 92 percent of its energy demand. For every ton of cement produced, 1.3 tons of C02 is released into the atmosphere. Worldwide, cement production generates over 1.6 billion tons of carbon, more than 8 percent of total carbon emissions. Waste is also considerable, as concrete accounts for more than twothirds of construction and demolition waste with only 5 percent currently recycled. 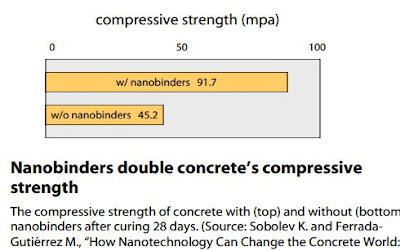 Nanotechnology is leading to new cements, concretes, admixtures (concrete
performance-enhancing additives,) low energy cements, nanocomposites, and
improved particle packing. The addition of nanoparticles, for example, can improve concrete’s durability through physical and chemical interactions such as pore filling.
In part because the bulk synthesis of nanoparticles such as carbon nanotubes is still too expensive for widespread use and concrete is such a high-volume material, few commercial products incorporate them. One that does is NanoCrete by EMACO, a concrete repair mortar with improved bond strength, tensile strength, density and impermeability, as well as reduced shrinkage and cracking. 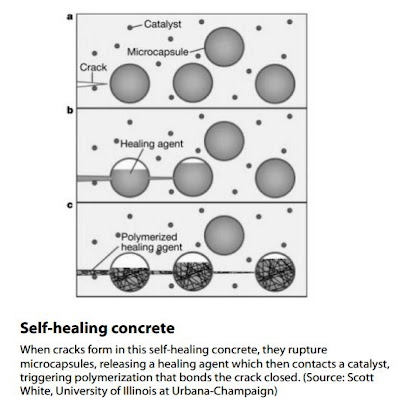 Conventional concrete must be reinforced with steel to resist tension loads, and placing steel “rebar” in forms prior to the introduction of wet concrete is a timeconsuming and expensive process. Nanofiber reinforcement, including the
introduction of carbon nanotubes, has been shown to improve the strength of concrete significantly. Even simply grinding Portland cement into nanoscale particles has been shown to increase compressive strength four-fold.

Carbon nanotubes also have the potential to effectively hinder crack propagation in cement composites. Reinforcing concrete with nanofibers will produce tougherconcretes by interrupting crack formation as soon as it is initiated. Development of low energy cements will also contribute to increased use of supplementary cementing. Concrete is attacked by carbon dioxide and choride ions, resulting in corrosion and separation of reinforcing steel. Chinese researchers have created sensors that monitor reinforced concrete for acidity and chloride ions, the primary causes of deterioration and failure. These sensors can be embedded directly in the concrete mix to enable monitoring in place throughout the life of a structure.

Nanosensors can also be integrated directly into concrete to collect performance data on concrete density and viscosity, curing and shrinkage, temperature, moisture, chlorine concentration, pH, carbon dioxide, stresses, reinforcement, corrosion and vibration. They could even monitor external conditions such as seismic activity, building loads, and, in roadways, traffic volume and road conditions. The latter are examples of “smart aggregates”, in which micro-electromechanical devices are cast
directly into concrete roadways.
Experimentation is also underway on self-healing concrete. When self-healing
concrete cracks, embedded microcapsules rupture and release a healing agent into the damaged region through capillary action. The released healing agent contacts an embedded catalyst, polymerizing to bond the crack face closed. In fracture tests, selfhealed composites recovered as much as 75 percent of their original strength. Theycould increase the life of structural components by as much as two or three times.

We have seen how nanotechnology is improving corrosion resistance in steel, but it is not yet impacting the structural steel market. However, several forms of steel using nanoscale processes are available today. A brand of steel reinforcing bar for concrete construction, for example, is now marketed as MMFX steel. MMFX steel is, according to its manufacturer, five times more corrosion-resistant and up to three times stronger than conventional steel. MMFX steel products are used in structures across North America including bridges, highways, parking structures, and residential and commercial buildings. The added strength of MMFX steel results in a decrease in the amount of conventional steel necessary to accomplish the same task. 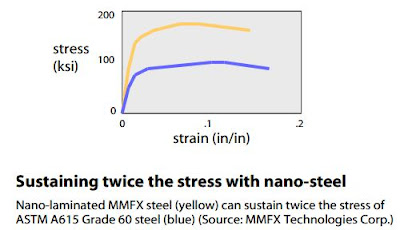 Another steel product employing nanotechnology, though not yet available in
structural dimensions, is Sandvik Nanoflex, which offers a high modulus of elasticitycombined with extreme strength resulting in thinner and lighter components than those made from aluminium and titanium. Sandvik Nanoflex was first used in medical equipment like surgical needles and dental tools. It has since been used in larger-scale applications like ice axes. The strength and surface properties of Sandvik Nanoflex are also creating opportunities for the automotive industry, replacing hard-chromed lowalloy steels. Thus, the environmentally unfriendly hard-chromizing process can be eliminated.
Nanotechnology is also impacting the welding process. Welds and the Heat Affected Zone (HAZ) adjacent to them can be brittle, failing without warning when subjected to sudden dynamic loading. The addition of magnesium and calcium nanoparticles, however, can reduce the size of HAZ grains to about 1/5th their standard size, greatly increasing weld toughness. This is a sustainability as well as a safety issue, as an increase in toughness at welded joints would result in a smaller resource requirement because less material is required in order to keep stresses within allowable limits.  Other research has shown that vanadium and molybdenum nanoparticles can improve the delayed fracture problems associated with high strength bolts.

Nanotechnology promises to improve the structural performance and serviceability of wood by giving scientists control over fiber-to-fiber bonding at a microscopic level and nanofibrillar bonding at the nanoscale. It could also reduce or eliminate the formation of the random defects that limit the performance of wood today.Experts foresee nanotechnology as “a cornerstone for advancing the biomass-based renewable, sustainable economy.” Nanocatalysts that induce chemical reactions and make wood even more multifunctional than it is today, nanosensors to identify mold,decay, and
termites, quantum dot fiber tagging, natural nanoparticle pesticides and repellents, self-cleaning wood surfaces, and photocatalytic degradation of pollutants are all envisioned by today’s wood engineers.

One of the great problems facing wood construction is rot. Pressure-treating wood can delay the problem, but the metallic salts employed can pose a health and environmental hazard.  Safer organic insecticides and fungicides, however, are often insoluble, making it difficult for them to permeate the lumber. Scientists at Michigan Technological University’s School of Forest Resources and Environmental Sciencehave discovered a way to embed organic compounds in nanoscale plastic beads. The beads can permeate wood fibers because of their tiny size.
Non-structural materials 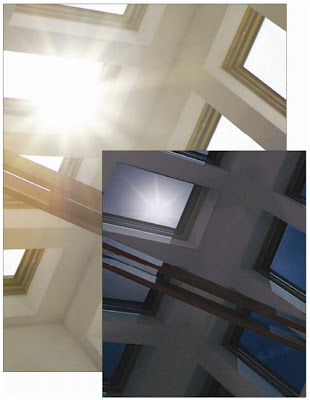 Reducing heat loss and heat gain through windows is critical to reducing energyconsumption in buildings. Energy lost through residential and commercial windows costs U.S. consumers about $25 billion a year.

Nanotechnology is reducing heat loss and heat gain through glazing thanks to thin-film coatings and thermochromic, photochromic and electrochromic technologies. Thin film coatings are spectrally sensitive surface applications for window glass. They filter out unwanted infrared light to reduce heat gain in buildings. Thermochromic technologies are being studied which react to changes in temperature and provide thermal insulation to give protection from heating while maintaining adequate lighting. Photochromic technologies react to changes in light intensity by increasing their light absorption. Finally, electrochromic coatings react to changes in applied voltage by using a tungsten oxide layer, becoming more opaque at the touch of a button. All these applications are intended to reduce energy use in cooling buildings and could help bring down energy consumption in buildings. 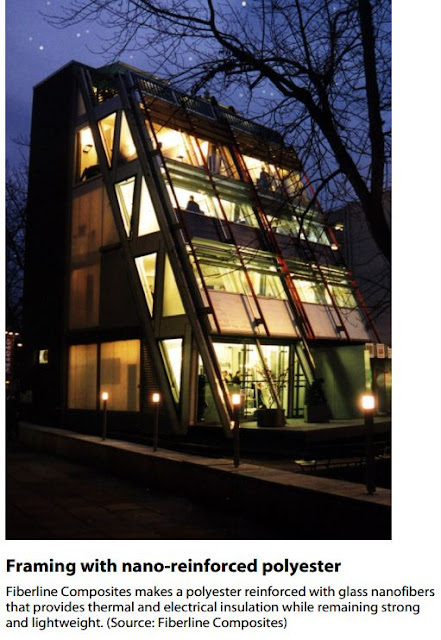 Vinyl (polyvinyl chloride or PVC), which is used in a wide range of building
materials, has come under fire recently as detrimental to human health. Phthalates, used to make PVC flexible, have been cited as bronchial irritants and potential asthma triggers. In addition, PVC production is the world’s largest consumer of chlorine gas, using about 16 million tons of chlorine per year worldwide. New alternatives to many conventional plastics will in time result from nanocomposite research. For example, glass microspheres, or microballoons, created using a spray pyrolysis process, can be cast in a polymer matrix to create syntactic foam with extremely high compressive strength and low density. Naturally occurring nanoscale aggregates can also be used in making nanocomposites. The crystalline structure of these ceramic materials allows them to be easily separated into flakes or fibers.

Fiberline Composites says its nano-reinforced polyester provides excellent thermal and electrical insulation while remaining strong and lightweight. The material is corrosion resistant, has a high fatigue limit, good impact strength, and fine surface finish. It can also be used as a load-bearing structural material. It has been used in bridges, doors, windows, facades, and structural systems. A team of University of Virginia researchers are using carbon nanotubes to unite the virtues of plastics and metals in a new ultra lightweight, conductive material. This new nanocomposite material is a mixture of plastic, carbon nanotubes and a foaming agent, making it extremely lightweight, corrosion-proof and cheaper to produce than metal. Their experiments revealed that while the nanotubes make up only 1 percent to 2 percent of the nanocomposite, they increase its electrical conductivity by 10 orders of magnitude. The addition of carbon nanotubes also increased the material’s thermalconductivity, improving its capacity to dissipate heat.


The average new American home contains more than 7 metric tons of gypsum,
making gypsum one of the most prevalent materials in construction today. North America alone produces 40 billion square feet of gypsum board (drywall) per year. But drywall raises many environmental issues. Panels must be dried at 260° C (500º F), making their processing energy consumption a concern. Drywall also consumes100 million metric tons of calcium sulphate, a non-renewable resource, per year. Synthetic gypsum avoids this problem, but its processing by flue gas desulfurization releases mercury Waste is yet another concern, since as much as 17percent of all drywall is lost during manufacturing and installation. Nanotechnology shows promise in the manufacture of lighter yet stronger drywall. ICBM, Innovative Construction and Building Materials, has developed a gypsumpolymer replacement for gypsum that they say significantly improves strength-toweight ratio and mold resistance.


Asphalt shingles make up more than 80 percent of the $30.18 billion U.S. roofing market. Heating their asphalt binders, however, can pose health hazards and the release of hazardous air pollutants. In addition, many asphalt shingles are reinforced with fiberglass, which has its own environmental and health hazards.Although nanotechnology has yet to reach the asphalt shingle market, research is underway at a number of universities and research centers on its application to asphalt in general.The University of Arkansas, Fayetteville, for example, is looking to improve asphalt’s durability, stiffness, and resistance to moisture damage in its project, “Potential Applications of Nanotechnology for Improved Performance of Asphalt Pavements.