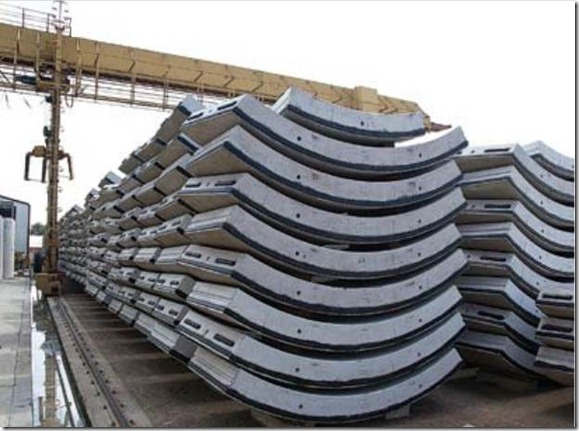 The Gautrain Tunnel Boring Machine (TBM) is a colossal moving factory that is boring a 3 km section of tunnel from Rosebank Station southwards, while at the same time lining the tunnel behind it with pre-cast concrete segments that are installed within the protection of the tail shield of the TBM.


The inner diameter of the 3 km tunnel is 5,86 m and the outer diameter 6,46 m, giving a thickness of 300 mm to the tunnel segmental lining.
DESIGN CRITERIA 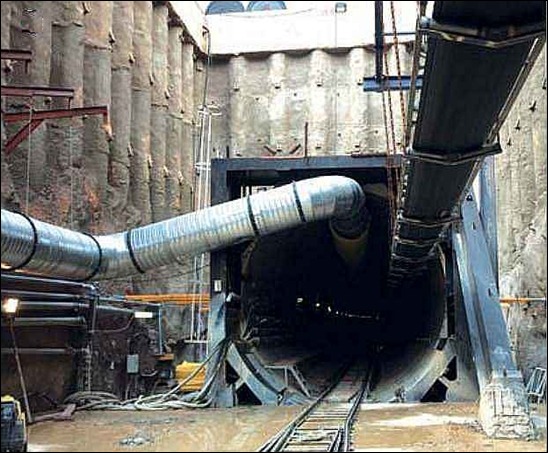 All elementary rings are identical and 1,5 m long, measured along the axis of the tunnel, with each ring consisting of 6 segments, namely:
To navigate curves the segmental rings are tapered. This allows for the geometric control of the general alignment with a theoretical radius of 750 m, by rotating the rings relative to each other. The segment length along the tunnel axis varies between 1,49 m at the key segment and 1,51 m at the directly opposite standard segment, S1.
To ensure a watertight tunnel lining, a compressive gasket is installed around the whole perimeter of each segment, in a specially formed rebate. in order to temporarily stabilize the segmental ring, temporary bolts are used to connect the newly installed segments with the previously erected ring. The segments incorporate box-outs and built-in plastic sockets to facilitate bolt installation. Segments are installed using a vacuum lifting device situated in the tail of the TBM.

The segment reinforcement design is based on maximum ring loads, allowing the use of identical rings throughout the whole bored tunnel length. The reinforcement design is based on two loading conditions, the first being the construction phase, catering for loads from the manufacturing to the final placing of the segments within the TBM, including the forces exerted by the thrust-jacks when the TBM is advancing (4 000 t). The second load case is the permanent phase, with allowance for all loads created by the geological ground conditions and by live loads during operation. 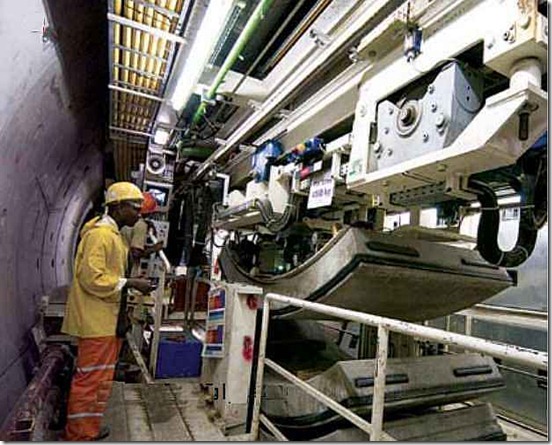 Since much of the tunnel is located beneath the ground water table, a stringent quality control system is being implemented to assure the water tightness of the final tunnel lining.
The pre-cast concrete segments are manufactured by Southern Pipeline contractors (SPC), at a factory located approximately 25 km east of Johannesburg. concrete is produced at the factory owned batching plant with a production capacity of 18 m3 per hour. forty-two sets of segment formwork (constituting 7 rings with 6 segments each) have been supplied by the French tunnel engineering group CBE, a world leader in the highly specialized market of steel moulds for tunnel concrete segments. Each mould is equipped with pneumatic vibrators and is required to produce concrete segments to the very tight tolerances of +/-1,0 mm. The dimensional tolerances of the moulds themselves are +/- 0,3 mm and these are checked regularly with appropriate templates.

CBE also supplied parts for the mould evacuation line, such as two vacuum lifting devices hooked to the factory’s gantry cranes to extract the segments from the moulds and transport them inside the factory, the segment rotation machine to turn the segments around from the production position to storage position, and the gasket bonding frame which applies pressure on the gasket after it has been glued into the purpose-formed recess in the segment. The completed segments are then lifted by locally manufactured grabs and transported to the factory’s storage area. 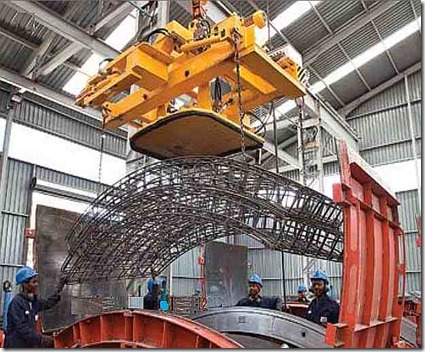 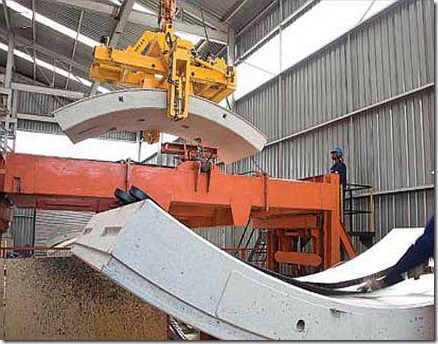 The production cycle commences with the preparation of the 42 moulds, including cleaning (removal of concrete, dust and other residue from previously produced segment casting), assembly of moulds (including periodic checking of tolerances), and application of release agent to the surface of the moulds. completion of preparation requires acceptance by a quality controller before proceeding further. The pre-assembled reinforcement cages (welded on specialized jigs) are placed with spacers fixed at defined positions. The cover to the reinforcement is checked by quality control. cast-in items, such as bolt sockets, are installed before the pre-concreting final check and closure of mould.
Concrete is manufactured on site at the factory by an accredited batching plant according to an approved mix design. Slump tests are performed on every batch before casting of segments. overhead concrete skips pour concrete into the steel shutters whilst vibrating the moulds, but in order to prevent segregation, vibration is not permitted to exceed 300 seconds per mould per pour. Fifteen minutes after the concrete has been placed and compacted, the cover of the mould is opened to allow concrete surface finishing and application of an approved curing compound to the extrados. to prevent dehydration of the fresh concrete the opened mould is covered with a tarpaulin. 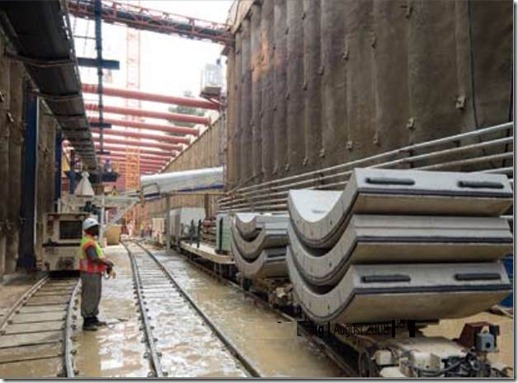 Twenty-four hours after casting, and provided that an early-age strength of 15 MPa has been reached, demoulding of segments takes place. After the sides of the moulds have been removed the segment is vertically removed out of the mould with a vacuum lifting device, suspended from a gantry crane, and transported to a temporary storage area for quality checking, which includes inspection of the gasket recess, minimum cover of reinforcement, and extrados surface finishing. At this stage, necessary, permissible concrete repairs are carried out, according to approved segment repair methods and each segment receives an individual identification mark which relates to its production history. for storage, handling and transport reasons the segments are rotated 180° by a segment rotation machine. once the segments have been rotated so that the intrados surface is face up, the segment is lowered onto the transfer trolley and moved to the next production station where gasket fixing takes place. Before the gasket and guiding rods are placed, the purpose-formed rebates are dusted and glue is applied using an airless spray gun. The guiding rods are fixed to each segment so that they will mate with the corresponding receiving recesses of the adjacent segment in the ring, thus assisting the accurate placement of segments inside the tunnel. After placing the neoprene gasket, the gasket press is lowered and pressure applied to achieve proper bonding.


In order to achieve the production of one segment per mould per 24 hour cycle the segments require an early-age strength of at least 15 MPa after 20 hours. The segments are required to have a compressive cube strength (150 mm x 150 mm) of at least 50 MPa at 28 days. Before erection in the tunnel, the concrete segment strength requirement is 55 MPa. Therefore, three extra test cubes are cast for each batch of segments and tested at 56 days to check that the compressive strength has reached 55 MPa. The concrete mix consists of cement CEM i 42,5 n (350 kg/m3 ), blast furnace slag (100 kg/m3 ), fly ash (100 kg/m3 ), aggregates (19,0 mm max size), water and plasticizer. Workability calls for 60 mm slump concrete and the maximum water/ cement ratio is set at 0,45.
The segments include 82,5 kg of steel rebar per m3 with the reinforcement being accurately assembled by means of specialized jigs. The minimum concrete cover to the reinforcement is 30 mm.
The 3 km long tunnel will be lined with 1 000 segments, consisting of 17 420 m3 of concrete and 1 437 t of reinforcement steel. The reinforced concrete volume of one ring is 8,71 m3 , one standard or counter key segment comprising 1,585 m3 of concrete weighing 4,1 t (concrete density 2,55 t/m3 ), and one key element comprising 0,787 m3 of concrete weighing 2 t.
Text: Ian Thoms & Oliver Gertsmann